In a flash....gift sharing in Geneva

Joe Biden brought flashcards to his photo shoot with Putin.

I had the need to run some errands today and was able to listen to the NPR (Nat'l Public Radio) coverage of the Putin-Biden meeting. NPR is a bastion of 'liberal politics'. They hated Trump and worked him over the coals.

Let's say that one side of the US 'deep state' is the east-coast (Washington, New York and Boston) mafia. They are in competition with their criminal associates from places like Miami, Atlanta, Los Angeles, Chicago, New Orleans, Seattle and others.

These regional oligarchs have favorites when it comes to electing representatives in Washington. Sometimes they play hardball with each other. They even kill one another when 'necessary'. Like the Texas/New Orleans/Miami mobsters that had JFK killed in 1963. Many of the Wall Street ruling elites were in on it as well. In fact the assassination was organized by Allen Dulles. (JFK had earlier fired him as head of the CIA.) LBJ then appointed the same Mr. Dulles as the director of the Warren Commission whose mandate was to solve the crime of JFK's murder. As we know, no real truth or justice has ever come from that cover-up operation.

But the dog-eat-dog regional power centers do now and then come together to wave the flag. And it is around the issue of continued US (glorious) control and domination of the world that these mobsters usually stand united. At some level they all profit from empire.

I continued following the Putin-Biden meeting on radio once home from my tasks. I was making my lunch while listening to the interviews with John Bolton and Michael McFaul (former US Ambassador to Russia from 2012-2014) as lead experts on Russia. Their take? 'Russia is a one-man state - he's an authoritarian - a czar wannbe. We need to be tougher with Moscow and help get Putin ousted'.

Like with China, the Modus Operandi of Washington is essentially this:  'Do everything dirty and nasty that you must - act like a terrorist if need be - but get this so-called leader out of that country now. By hook or by crook. The US must be in control. They either submit to us or we will grind them into the dust.'

NPR didn't cover the news conference of Vladimir Putin - with the slight exception of 4-5 words in his own voice and the 'news analyst' filling in all the blanks. Lots of talk about Navalny. Lies about Russian invasions of Georgia, Ukraine and they even seemed to infer that Moscow had taken over Belarus. As usual the US media mouthpieces are always creating fear of Russia being an expansionist power while Washington plays the role of the paragon of democracy. The world loves us!

NPR covered the entire Biden news confab. He stumbled around a bit but all in all held it together better than I had expected. Likely he got a good Vitamin-C jab right before it all began.

So Biden 'pressed Putin' on human rights. They are going to each let their ambassadors return to their respective posts. Some talk about talking about cyber. Lots of 'rules of the road' mumbo-jumbo from Biden. Russia won't follow the rules, Biden said.

No one tells you that as the US has pulled out of one arms control treaty after the other, they've concocted their own set of 'rules' that everyone should now follow. Globally. I've yet to see a copy of the rules. The US has very devious intentions.

Washington wishes to rid the corporate oligarchs of the pesky-mosquito called the United Nations where Russia and China have veto power as members of the Security Council. Thus the need these days for a steroidal expansion of NATO into a 'global military alliance'. And even into space. The army of corporate capitalism.

The plan to replace the UN with NATO is being resisted more everyday. 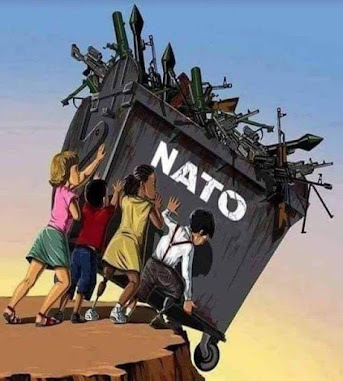 So Biden went and did his big talk for public consumption back home. He got nothing because Russia, China, Iran and others are demanding an end to 'king of the hill'. A new day has arrived. The US either joins the rest of the world in honest and true partnership or has to go to war against most of the world.

It's now that stark. The war mongers know that much money could be made with a global fight for ultimate power - many of the fundamentalist Christians would embrace the resulting Armageddon.

It will all come down to just how far the US ruling mobsters are willing to push. The unknown factor is the American people, if willing to stop swallowing shit and rise from their long sleep, we could move in a unified direction demanding an end to corporate corruption and control.

But the liberals would first have to divorce the Democrats. I have my doubts.

This is our real struggle ahead.