We Won't Give Up the Fight! 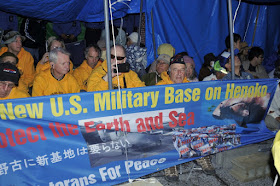 We were up early yesterday morning and on the road to Camp Schwab where there was a 6:00 am gate blockage against the early construction work on the proposed Marine airfield twin-runways that will be plunked down in pristine Oura Bay.

Our Veterans For Peace delegation was warmly received by the more than 100 Okinawan citizens who were already gathering in front of the gate when we arrived.  Many of them were elderly and protest leaders had them chanting and singing even before the sun rose.  We were given tiny folding seats in the front row of the festive crowd and we tied our banners to thin plastic poles that held aloft a blue tarp used to protect from the rain and sun. 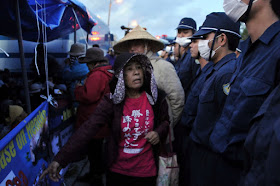 Just after 7:00 am the Japanese police (from Tokyo and boarding in an expensive ritzy resort nearby) began hauling the gate blockers away one by one.  Our VFP contingent locked arms and spread out flat on the ground.  We were the last to be taken but were carried away just like the rest of the folks.  They stowed us in a make shift holding pen behind a couple police buses and after about 15 minutes let us go once the gate was cleared for the waiting construction vehicles. 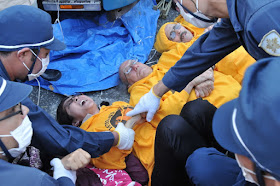 The Okinawan peace activists quickly moved down the road a bit to the main base gate and proceeded to sit in the road blocking that one.  Police pushed enough people aside to open one lane so cars could leave the base and again our VFP crew was positioned in the front row so the many American GI's leaving the base could not miss our white faces and VFP attire.  I saw one Marine give us the thumps up as his car left the base. 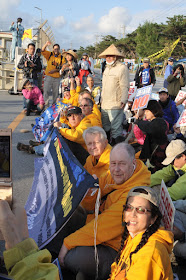 One 87 year old woman we met at the gate told us her story - she was burned severely by American flamethrowers during the 1945 US invasion of Okinawa.  A US military officer once told her, "Killing is my business."  She had fire in her eyes and is much adored by the protest crowd.

We were next loaded up and driven an hour further north to Takae where even another US base is located.  This one is called the northern drill area for jungle warfare where three kinds of helicopters are being deployed (including the controversial Osprey which has often crashed).  This area is a subtropical forest and mountain area that the military has used since Vietnam for jungle training.  Sixty percent of Okinawa's drinking water comes from this region.  It was only in recent years that the small local village called Higashi (population 150) learned that the US had tested Agent Orange in the surrounding forest during the Vietnam years.  Dow Chemical (which manufactured Agent Orange) drums were uncovered in the area.  The locals tried to get the water tested but US forces interfered with that process.  Some animals in the area have been found with deformities. 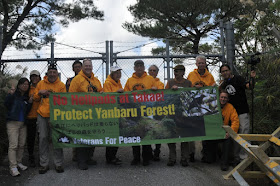 We jumped back on our bus and returned to Camp Schwab just in time for what is called "Henoko University" which was a group of about 50 folks again blocking the construction gate.  We were invited to join them and each of us were asked to tell a bit about our time in the military.  I talked about my own conversion from a young militarist to a peace activist largely because of the protests at Travis AFB in California where I was stationed and the impact of those regular vigils on the GI's inside the base.  I suggested that they are touching more hearts than they could ever imagine and that the sparks from their non-violent protests are causing many inside the base gates to open their minds and debate the issues.  So keep protesting!

At 5:00 pm we arrived in Nago City to meet with Mayor Inamine who a few of us from VFP had met in Washington last year when Okinawan leaders traveled to DC to lobby against the Henoko runway project.  Mayor Inamine stood by a huge map of the city on his office wall and pointed out four areas where he is using his powers to block requests for base expansion operations.  He reported that 80% of the people in Okinawa are opposed to US bases and that he and the current Gov. Onaga were elected because of their opposition.  The mayor reported that Japan's Prime Minister Shinzo Abe and Washington were trying to drown Okinawan citizens demands - it's a classic power struggle which is now before Japan's Supreme Court for resolution.  The question: Can Tokyo overrule local elected officials who are implementing the will of the people? 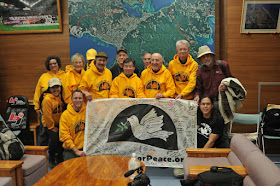 Mayor Inamine also reported that Japan is paying for the Marine runway that is proposed to be built on top of Oura Bay.  Just like the South Korean government is paying for the Navy base on Jeju Island - the US is now forcing 'host governments' to pay for greater shares of Pentagon military operations in various countries.  This then allows Washington to say that the conflict between local citizens in South Korea or Japan is a 'domestic issue' and that the US really can't get involved.  Total bullshit.

The mayor told us that "We don't want to take the part of victimizers in a war.  During the Vietnam War US bombers took off from here.  It so offended us."  He also stated what we heard from our other meeting with the mayor of Yomitan Village two days ago - "Okinawa does not prosper from US bases.  Less than 5% of our island income comes from bases.  The new runway has a flight path that would go directly over a popular tourist resort that attracts 200,000 people each year.  If the Henoko runway gets built they won't come back anymore."

Already we can see that from top-to-bottom the people of Okinawa are in serious revolt against the US military empire.  It's days are numbered.  Ordinary citizens are blocking base gates - city mayors and the governor of the island are using every legal means at their disposal to block base expansions.  The media on Okinawa is covering the story practically every day on the front page.  (See one example here) The right-wing Abe government in Tokyo is getting hammered in Okinawa.  In Japan citizens are allowed to designate which of the nation's 47 prefectures (states) they want their taxes sent to.  Many people in Japan, in solidarity with Okinawa, are designating their taxes be sent to the struggling people in Okinawa.

It makes our VFP delegation furious to see the abuse the people of Okinawa are daily getting from Tokyo and Washington.  The people keep telling us they will never give up - we heard the same words on Jeju Island.  The folks on Okinawa understand what real war means.  The memory of the 1945 US invasion that killed one out of every four people on Okinawa is seared into their consciousness.  They understand that US bases on their island make them a target once again.

The people here also keep saying that they are tired of war and they realize that they must fight hard to make sure it does not destroy their beautiful island home once again. We keep telling them that they are not alone - we are all in this one together.